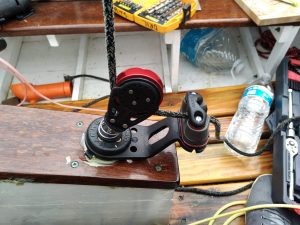 So, about a month or so ago I managed to get some more done on the Lady Jane.

If you remember, when I got it on the water for the last Wooden Boat Festival, it was sailable, but still needed some bits resolved. Sailing the boat was a two handed ordeal as I had no mainsheet cleating system and no way to easily lock the tiller. I also had not finished the running rigging for the spinnaker.

So, I started off by finally springing for the new Harken ratchetmatic block and swivel for the centerboard trunk. I had to remove the top of the trunk cap, and open up a pocket for the nuts to set into on the underside, but it all came out good. 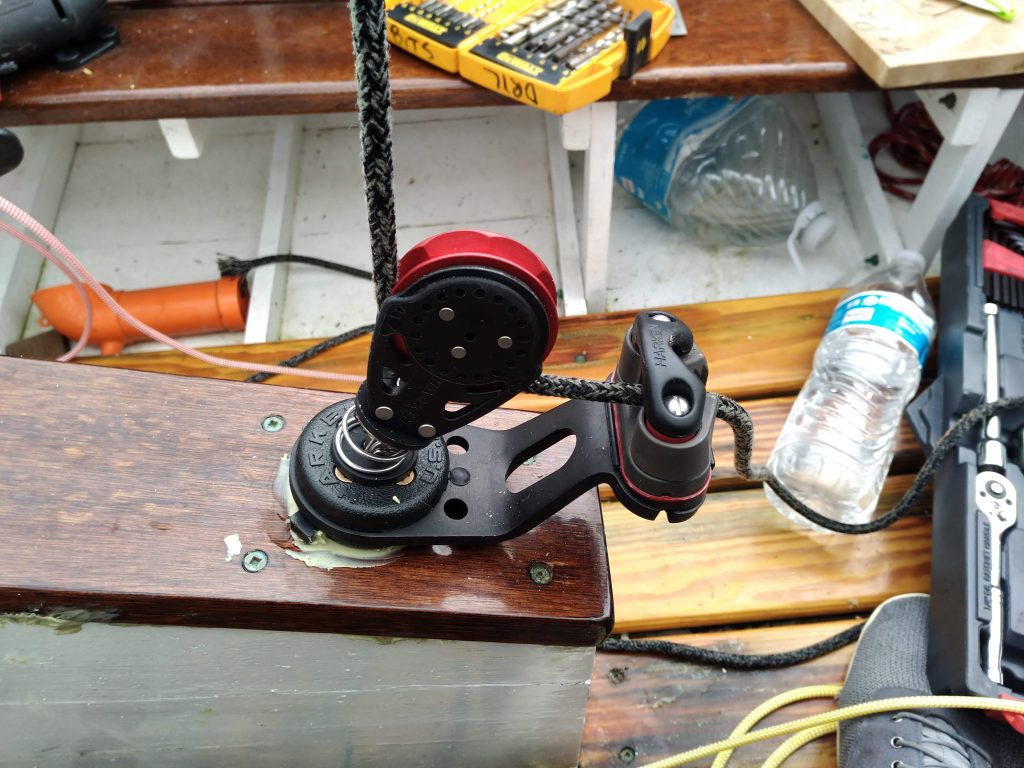 So now when I sail, I can at least have one hand free. I’m also eyeing adding a tiller comb- I had been thinking about a tiller tamer, but honestly the more I looked at how I’d have to rig it up and how it would work in practice the less I thought of that idea. Once again, looking at how things were done on older boats provided some inspiration and a few google searches later I’m eying this thing: 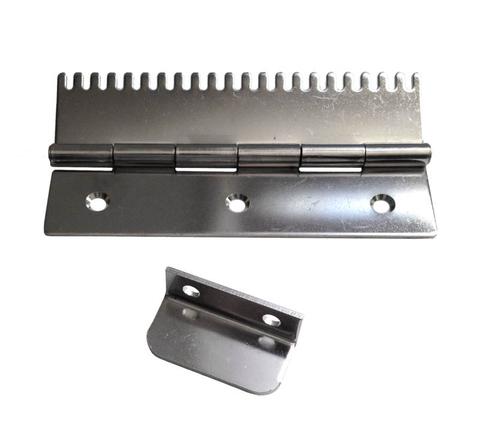 The theory is that the hinged bit can be mounted back on my aft combing, and the other bit on the bottom of my tiller. Normally, the comb is hinged down out of the way, but can be flipped up and then when you set the tiller down the tab locks into the comb teeth, holding the tiller steady. Like a tiller tamer, but just lift the tiller to free it and no cat’s cradle in my cockpit.

I’ve only found one place that sells this one, and it is across the border in Vancoover, BC. If they come back with good measurements, I think I will pick one up.

I also got my spinnaker tackline setup. First, I needed to get the bowsprit setup, and then lead the tackline aft. So, I got out the 6′ dinghy and proceeded to splice and whip a dyneema loop and an antal ring to the bowsprit fitting. 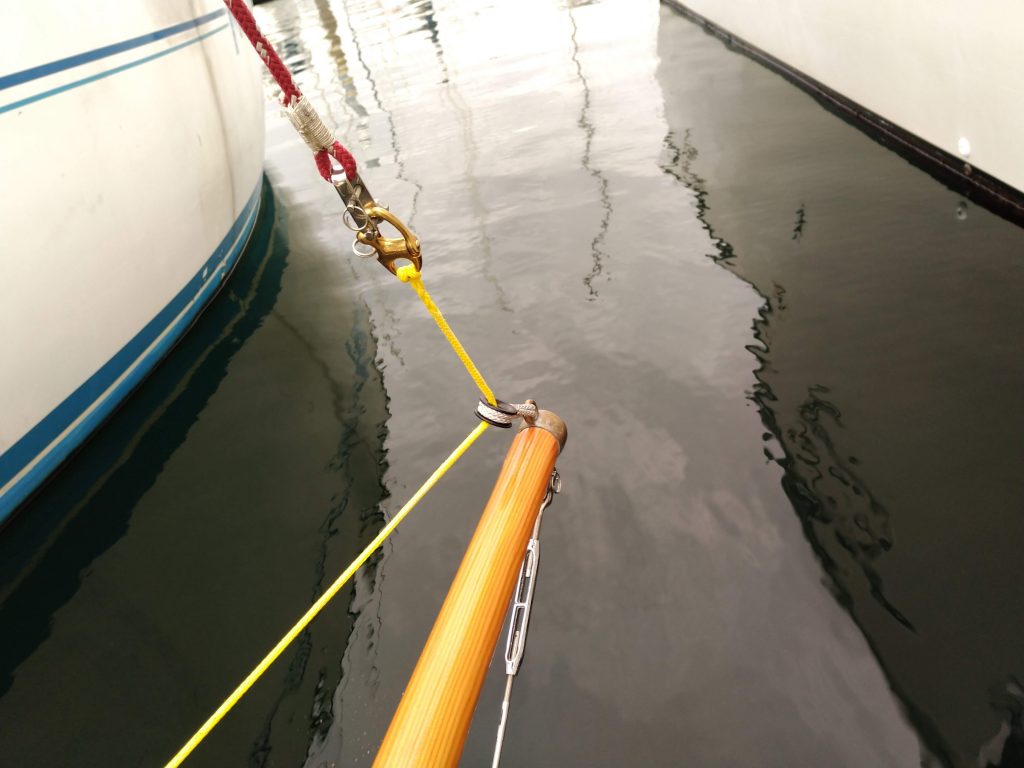 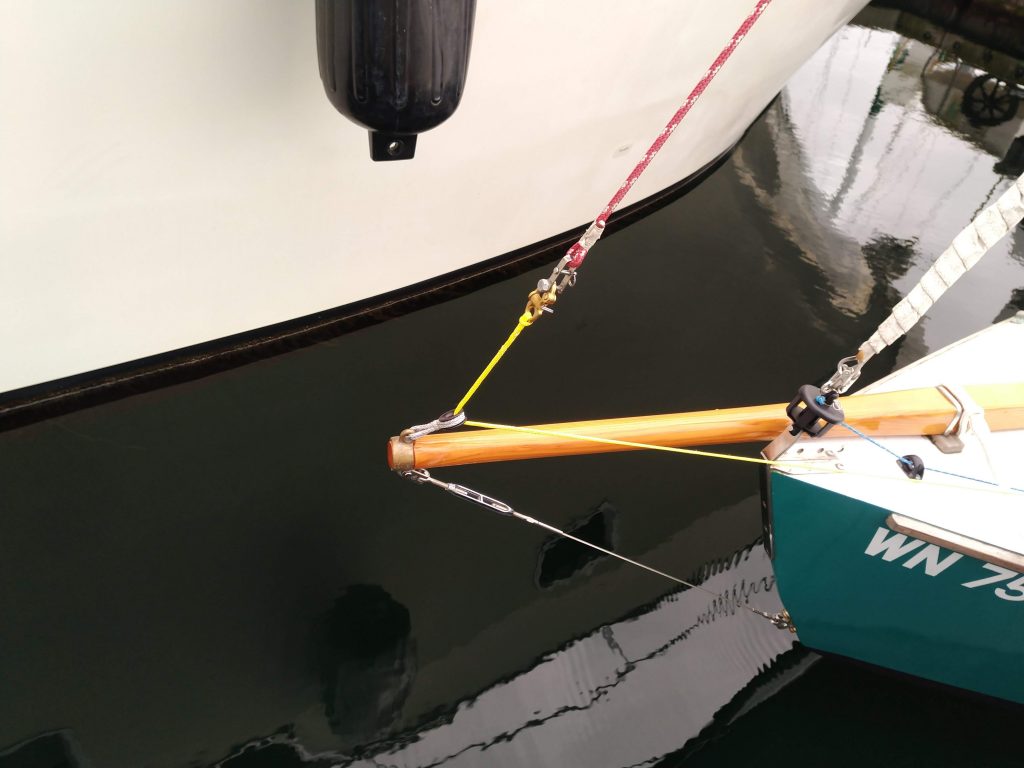 I like how it turned out, though I’ll keep an eye on it to see if it has any issues.

The tackline then runs aft on the port side, thru a fairlead on the cabin side to a PXR clutch. 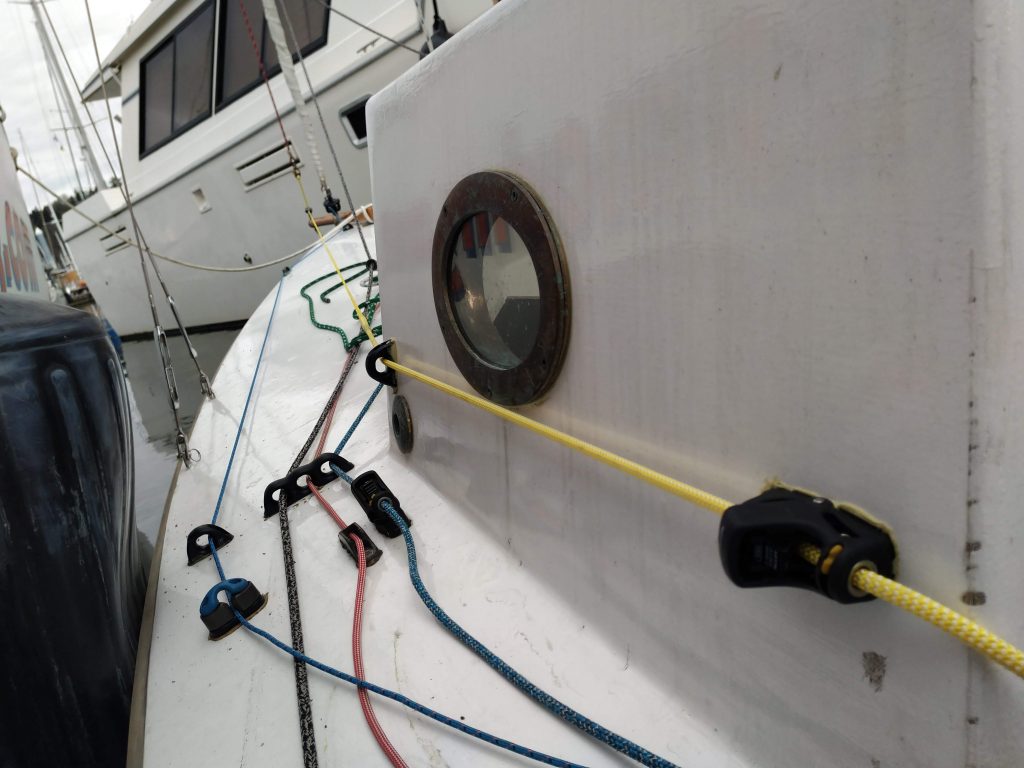 Mounting it on the cabin side kept it up high enough not to interfere with the other lines.

After getting this all setup, I had to take it for a sail. Good news, The mainsheet swivel setup works well. Also, It had been a while since I had her out and I forgot how beautifully she sails.

I really wanted to get the spinnaker up for the first time, but sailing solo with a spinnnaker and no autopilot or tiller lock is kind of a dance. My first mistake was to try and set it up for outside gypes. I almost immediately ran over the lasy sheet, but not before I managed to shrimp the kite. After trying all sorts of combinations and orders of halyard, sheet, and tack line, I managed to get it hoisted and flying.

In a word, it was… Terrifying.

Once I got the spinnaker up and flying, I cracked off of dead downwind and the boat accelerated. It really pulled. It was at this point I realized that I couldn’t see any part of the spinnaker. Not one corner, not one edge.
As the boat sped up, the apparent wind radically shifted all over the place as I played with the angle off the wind and trim. The few times I checked my GPS, it claimed I was at around 5.5 knots, although I believe it may have been more from the way the boat was handling and the wake I was leaving. It was amazing, but terrifying, nonetheless.

I got back to the marina after an hour or two, mentally exhausted but exhilarated. I’m going to have to play with this some more before i can make any calls, but I know my spinnaker sheet is too long and I know I want to try going for inside gybes. Hopefully I can get it out again sometime soon and climb the learning curve a bit more.

In other news, I’ve applied to be a presenter at the wooden boat festival in Port Townsend; I’ve offered to give a talk about what it is like for an amateur to bring a boat back from the dead, going over the Lady Jane’s refit. Hopefully, my application gets accepted.

I’m also a little worried, with the corona virus. All the race crewing I had lined up this year has been canceled and now I’m just praying the Salish 100 and the barefoot raid don’t get cancelled. That, and that the death toll isn’t too bad from it. Time will tell. Hug your kids.