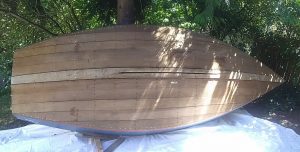 First, I hauled out the benches for the boat. Originally, the Lady Jane had a set of full wraparound mahogany benches. 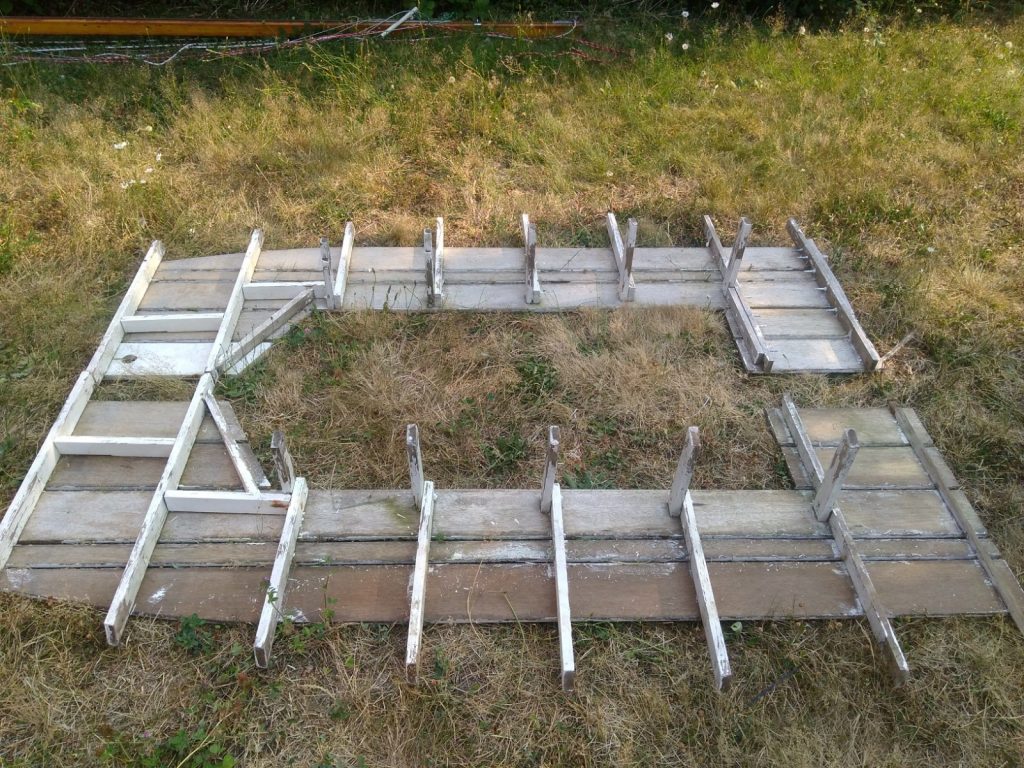 I wanted to reuse them for the now much smaller cockpit, but I needed to trim them down, and open up the back to make space for the hatch I added for the watertight lazerette compartment. 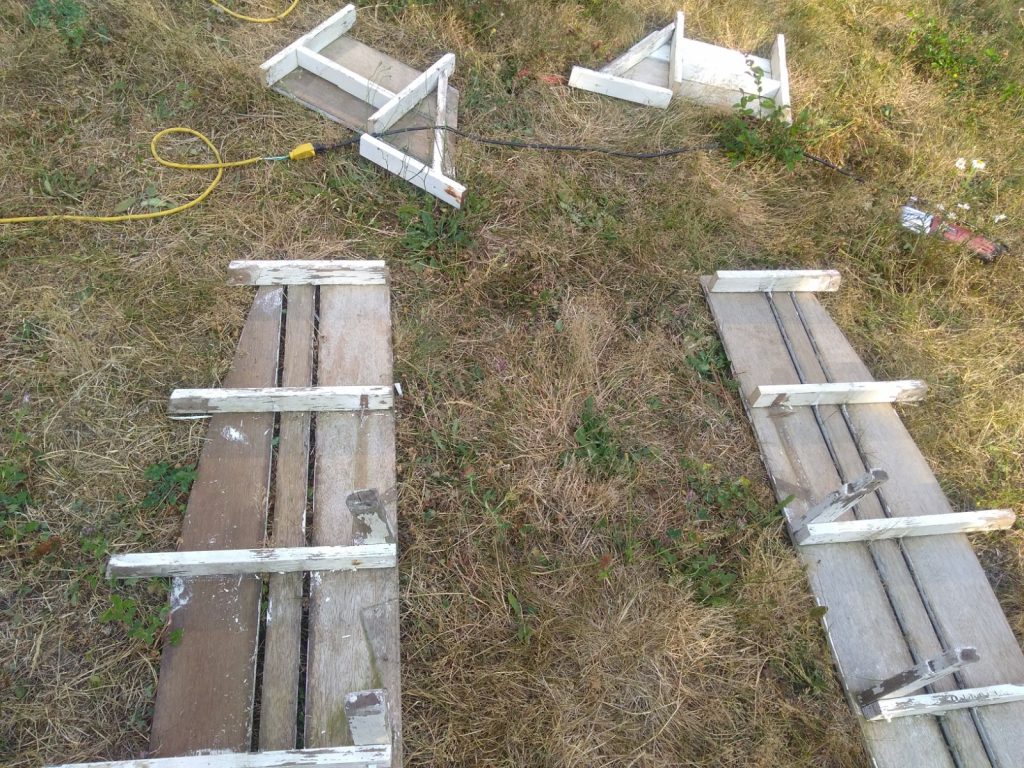 So I started doing the layout and trimming. In the process, I discovered the only rot I’ve found in the whole boat. 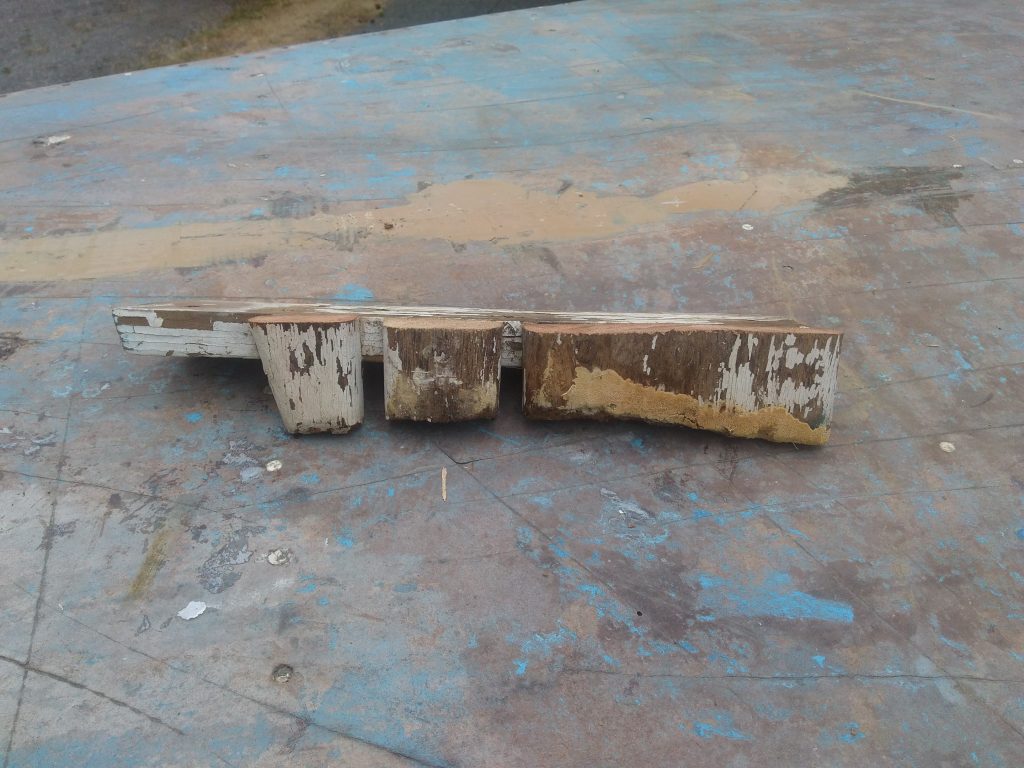 Miraculously, it was the last inch of the benches on one side- and i needed to trim three inches off to get the benches to fit.

Once they were cut down, I test fit them in the cockpit. 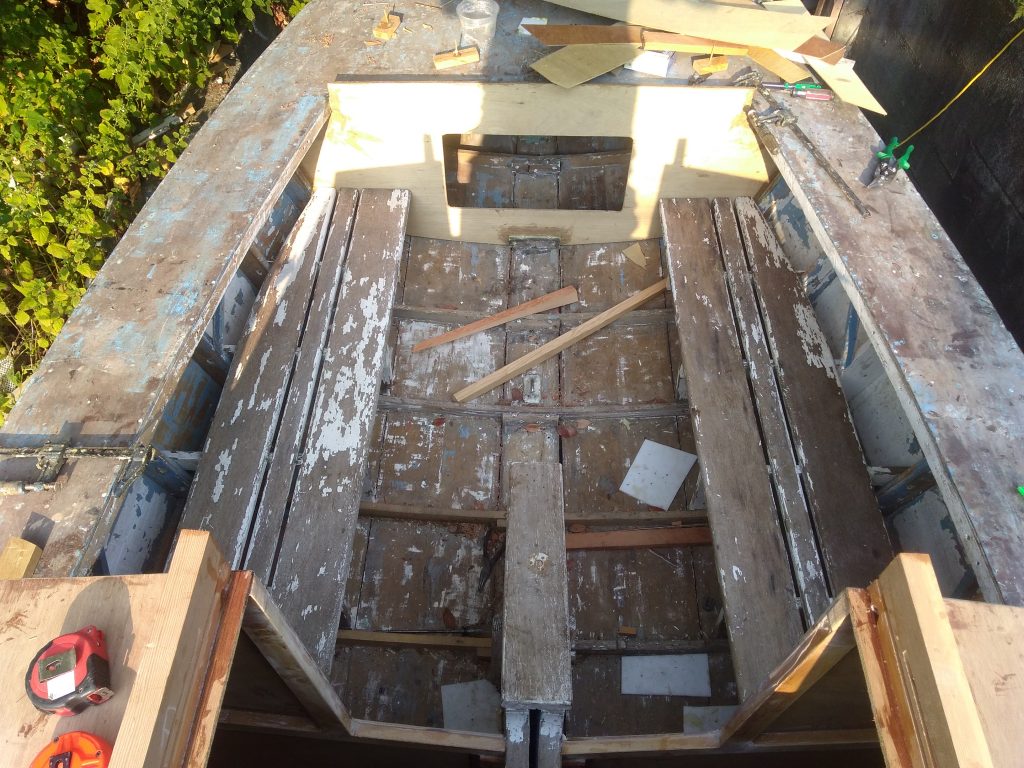 I really like how this is turning out. The plan is to remove the last of the paint, clean them, and varnish them.

After getting the benches and the supporting cleats on the bulkheads done, I cleared the tools and bits off of the boat, in preparation for setting the mast to check the cut of the sails and to measure for the replacement standing rigging. 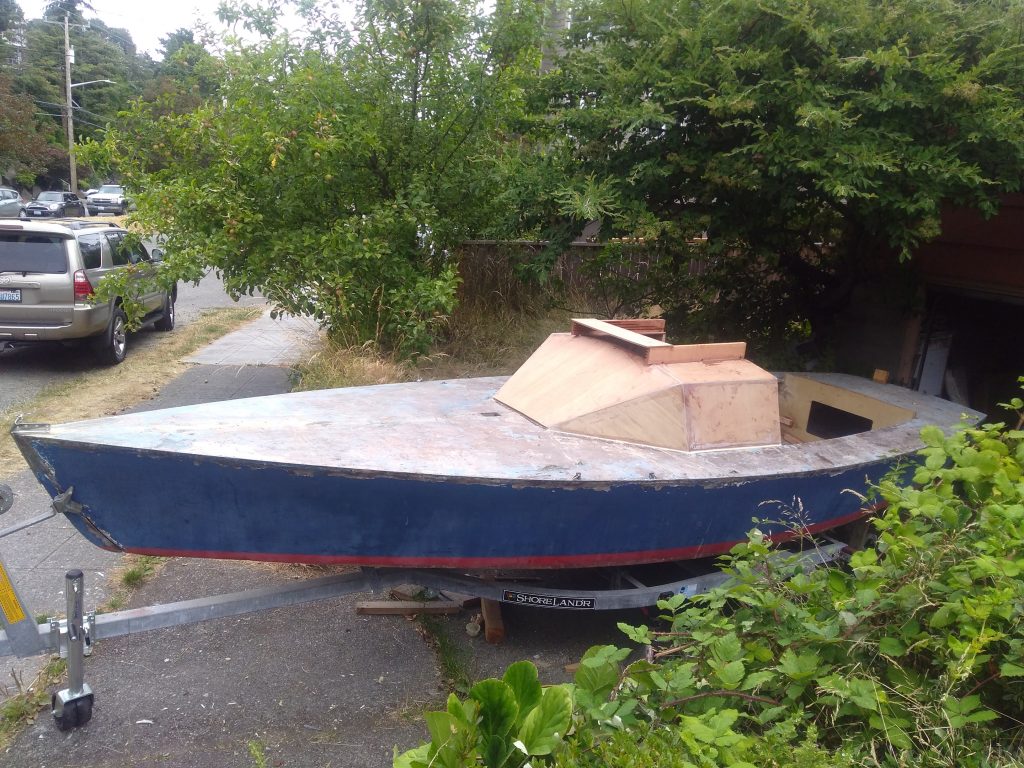 In this shot, you can see how the lines of the cabin worked out, and the half-finished hatch. I wish the hatch was less bulky, but i had to compromise on height to keep the length down. then with the help of two friends, I set the mast and got the rigging length figured out. 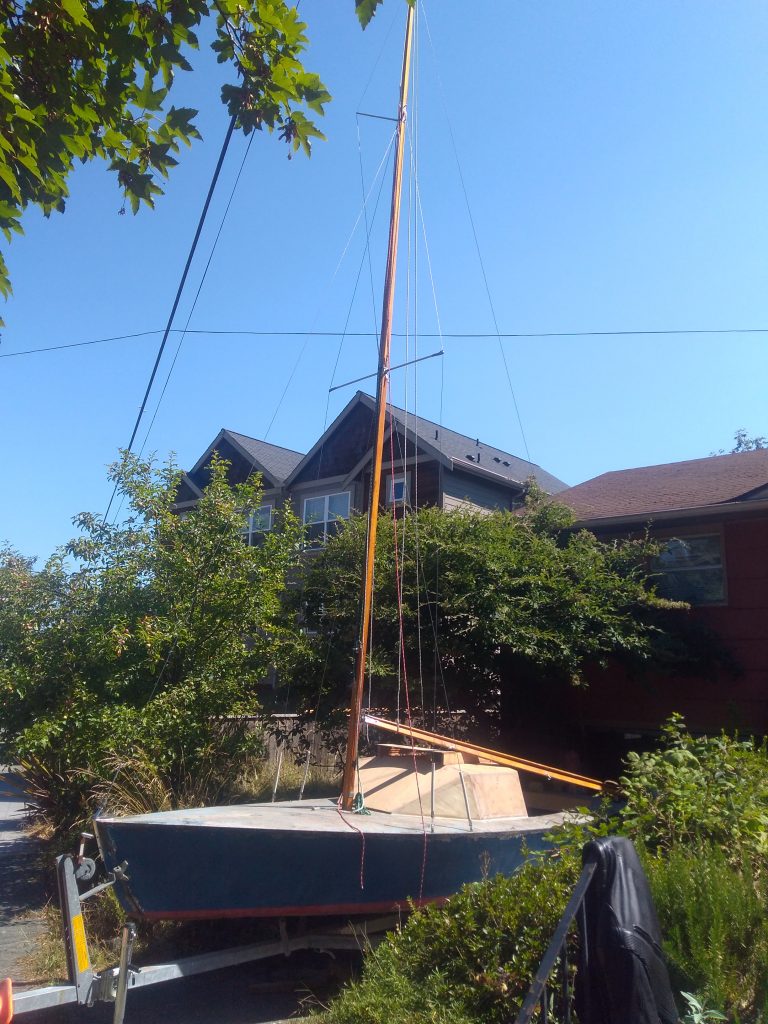 After that, I took advantage of the raised mast and put all three of the mainsails on to see how they cleared with the cabintop. 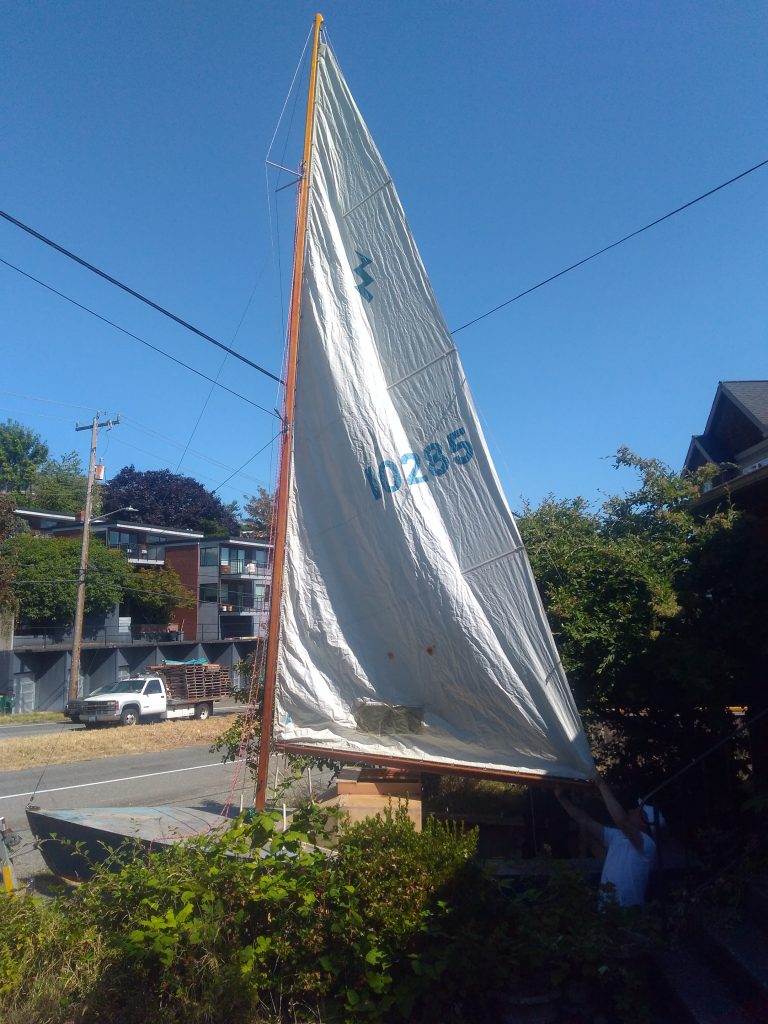 I forgot to mention previously that I had found a mast and some extra parts on craigslist fro ma guy in Wenatchee. I purchased the mast, a spinnaker pole, boom, two rudders, an extra tiller, and a set of sails for a reasonable price. according to him the mast was made in 1985 in a boat shop here in Seattle. it’s made to the class plans, with the exception that instead of an in-mast sheave it has a block attached to the aft of the mast.

I also realized upon closer inspection that i actually had the sail shown in this old picture from 1965 that i had found in the corinthian yacht club’s scrapbook. 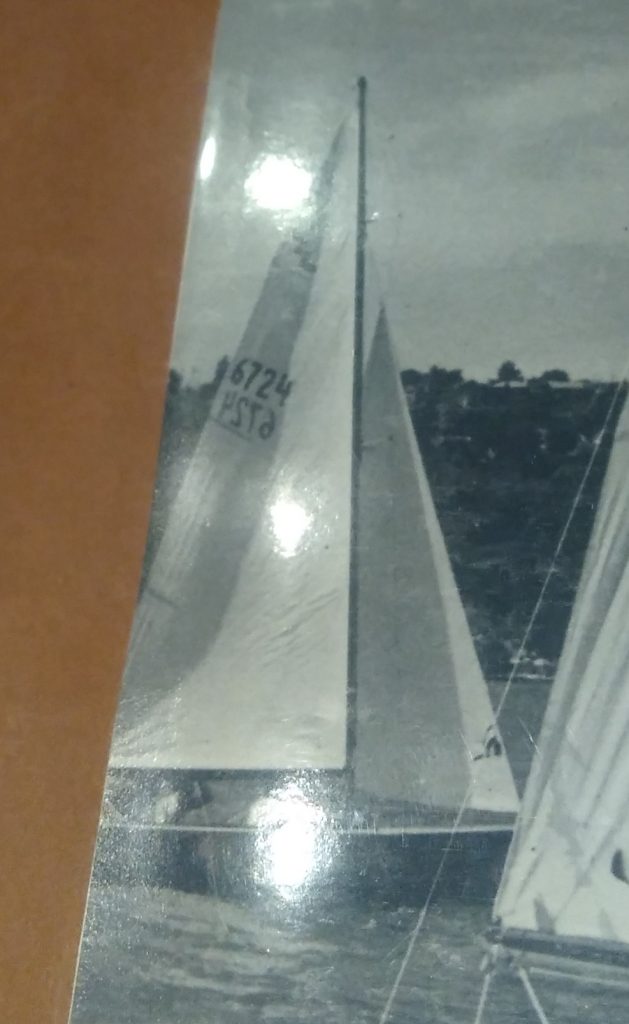 And I think that is pretty cool.

After that, even more got done. I’ve paused work on the topsides to begin the bottom work. the boat was hauled into the backyard, and eased off of the trailer onto cribbing. 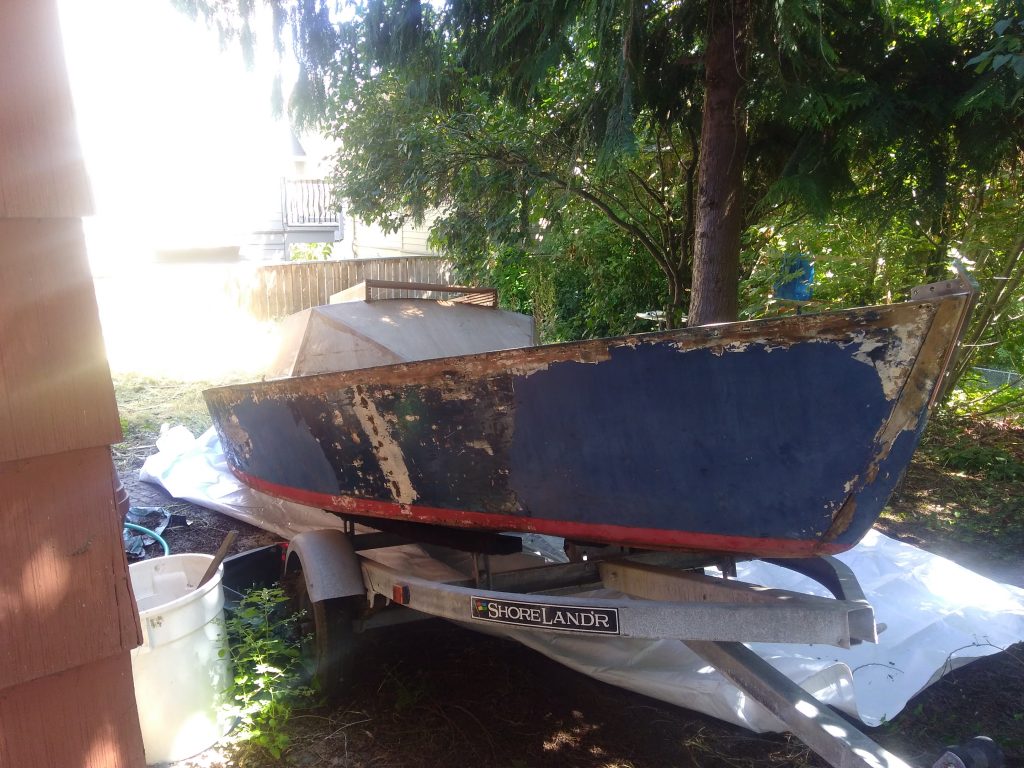 The trailer has a hinge mechanism that made this much ,much easier than I had thought it would be. Once it was off the trailer, we lifted it onto it’s side and after placing an old foam RV matress between it and a cedar tree, we got it up on it’s side. i then put a safety strap around the tree to hold it from falling over or shifting. 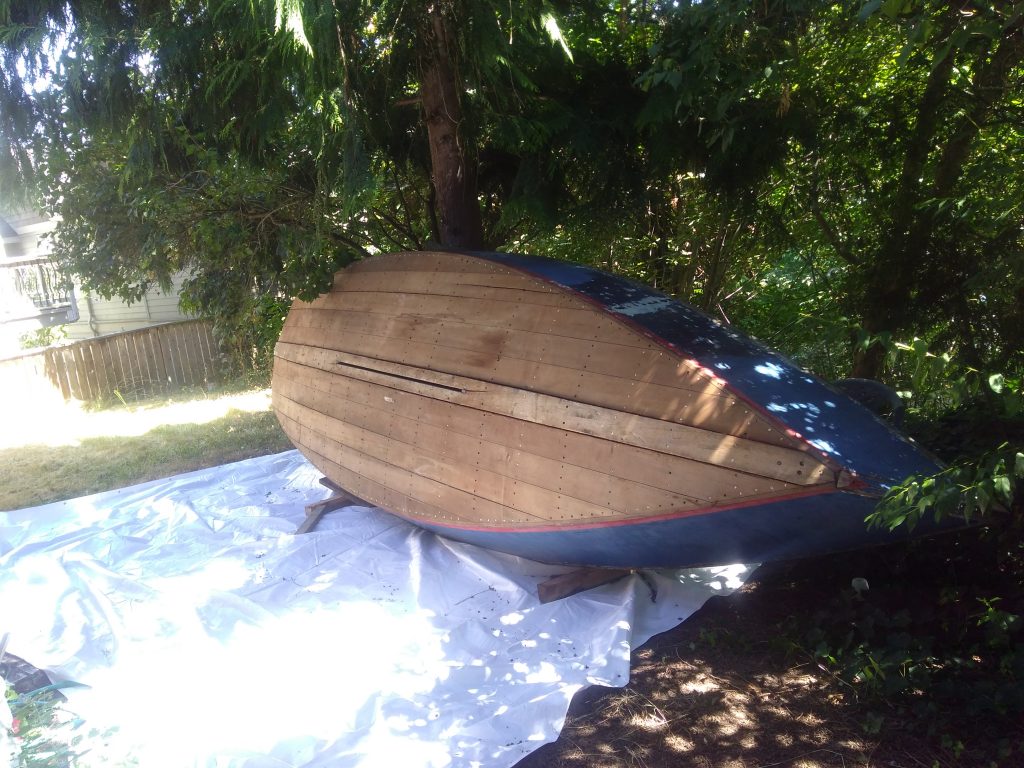 Honestly, it’s kind of magical to stand next to the boat and see and feel the curve of its bottom. I can’t really describe it, but when lit softly by the Christmas tree lights we use to light up the back yard it is really almost an experience. 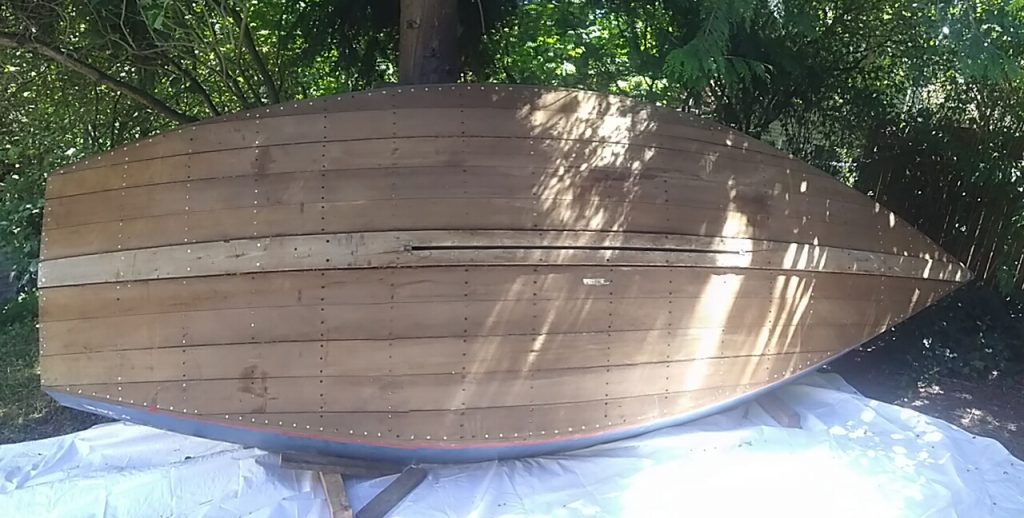 These pictures really don’t do it justice.

I’ve started refastening the hull, and will have more news as that progresses.

One thought on “Benches trimmed, rigging measured, and boat overhauled”